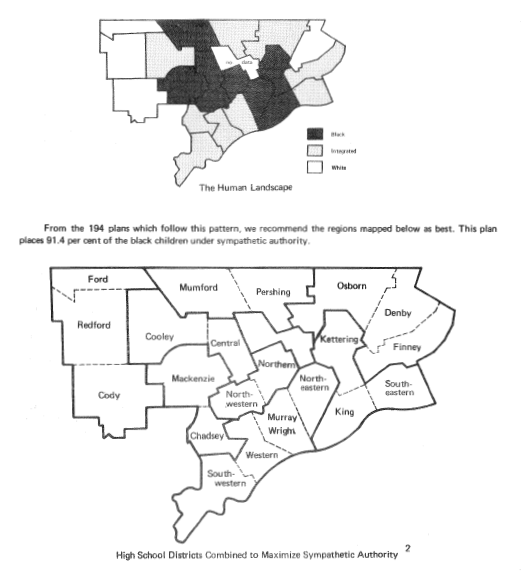 Highlighted by the MIT Center for Civic Media, this map by the Detroit Geographic Expedition Institute’s (DGEI) “Field Notes II: School Decentralization” demonstrates the racial disparities in education in the city.

“In order to maximize sympathy and retain community control over community schools, the DGEI proposed a plan which placed 91.4% of black children under “sympathetic authority”. Their plan followed divided the districts according to the existing racial landscape of the city.”

Black children are among the most abused children in America. It is imperative that these most endangered children receive the most protection. (The infant mortality rate of black children in the King High School area on the east side of Detroit is higher than that of San Salvador, a fact that some Americans consider unpatriotic.)…

To meet the primary goal of protecting the most abused children, every possible legal regional combination of Detroit high school districts (over seven thousand) were ranked according to sympathetic authority to the children from most to least. The measure of sympathy used is “the total number of black children under white authority.” A regional school district is defined as being under white authority where a majority of voters voted for white candidates in the mayoral primary.