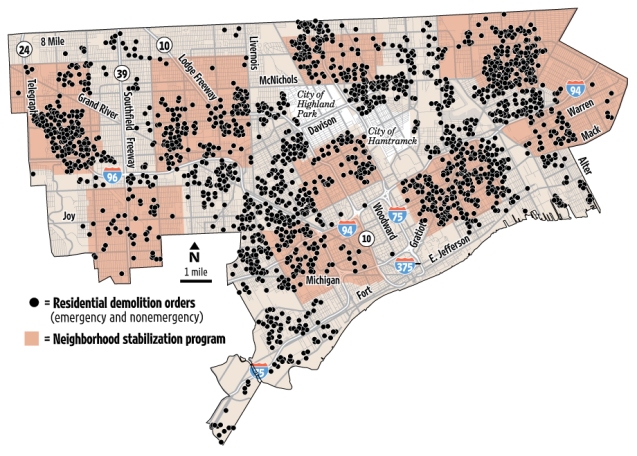 Based on this map from the Free Press, it would appear that the idea of neighborhood “stabilization” is directly related to the demolition of vacant and derelict properties. This is a key piece of Mike Duggan’s plan for Detroit if he is elected Mayor.

The question of vacant property is quite a buzz in Detroit now, especially with the work of the Detroit Blight Authority and the ongoing efforts of Blight Busters. The city government has been moving quickly to clear up abandoned homes in the paths of schools to increase safety of children walking to schools.

Additionally, there have been a number of recent demolitions of homes bought in the recent auction. As Detroit continues to be managed by an Emergency Manager, it will be interesting to see if the money will continue from private sources for demolition/ stabilization efforts such as the recent federal dollars disbursed to a number of Michigan cities, including Detroit.