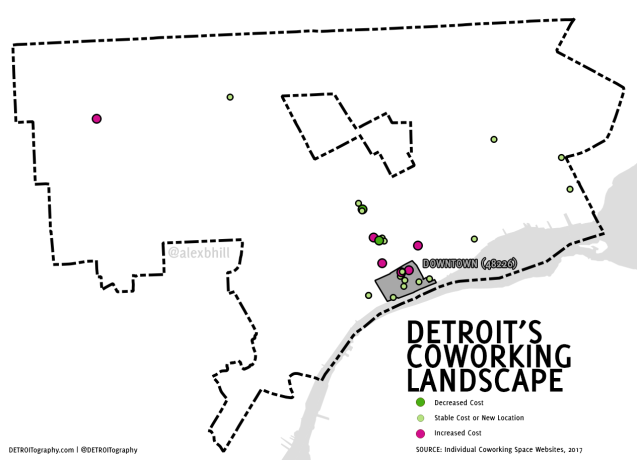 Since 2014, I’ve been following the coworking trend in Detroit. I’ve used space for team work at An Office in Detroit that has seen a change in ownership, but is still going strong. In the last 3 year, there have been 8 coworking spaces that have closed and 13 new spaces opened, including the arrival of WeWork in two Downtown locations and the expansion of Bamboo Detroit into a second space. It is safe to say that the majority of the action is located Downtown within the 48226 zip code. 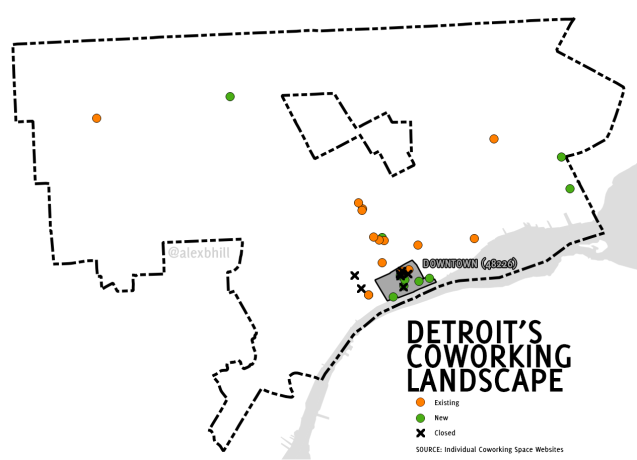 The most interesting coworking shift has been change in the monthly price of a drop-in desk or “hot desk.” Out of the 13 spaces that have been operating since 2014, 6 increased their prices, 2 dropped prices, and 5 kept prices the same (first map). In 2014 the average cost of a coworking desk was around $110, but in 2017 the average is $130 since many of the new spaces have entered the coworking market at the top end with a “hot desk” starting at more than $200/month.

There has also been a rise of parent and woman supportive business spaces, namely Detroit Mama Hub operating out of Ponyride, Femology located Downtown, and the Detroit Parent Collective near Marygrove College. There have been many coworking additions Downtown (7 of the 13 new coworking spaces), but thankfully a number of new options beyond the Central Business District. Southwest is still conspicuously absent of a formal coworking space. Maybe I’m just missing it?