For the last few years I’ve been thinking about Detroit’s most interesting bird around Thanksgiving time. Living near Brush St. and I-94, my dog and I would regularly see a male pheasant patrolling the vacant lots next to the expressway. This year I started working on the Eastside and on an almost weekly basis came across a pheasant flying in front of my car along Ferry St. before Mt. Elliott.

I started scrapping any and all online media that mentioned pheasant sightings in Detroit and included the data from WDET’s crowdsourcing (read more on the history of Detroit pheasants here too). For the analysis I had 109 sightings of roughly 300 pheasants in Detroit between 2002 and 2016. Some sightings were likely the same pheasant seen over and over again while others were just a lone bird out looking for food beyond its normal range.

Using inverse distance weighting (IDW), I was able to build a rough idea of the Detroit pheasant habitat. The Eastside, specifically Elmwood Cemetary, is the central home of the Detroit pheasants even though they are often claimed by North Corktown as their neighborhood bird. In the map below you can see that the pheasant range maps very closely with more vacant spaces. I assume the range of the Detroit pheasant will become more limited as Brush Park is redeveloped, in-fill development completes in Midtown, and The Villages continue to be built up. 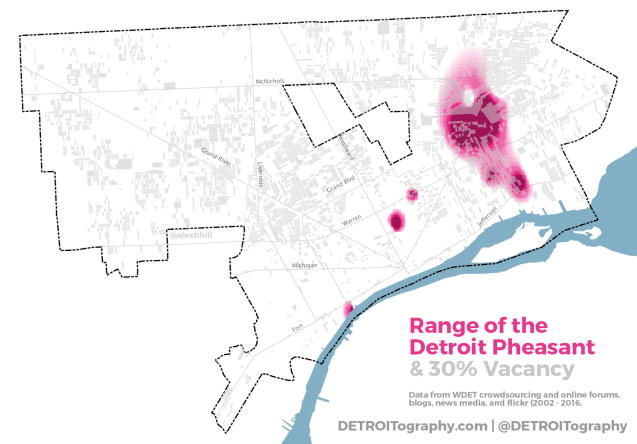 3 thoughts on “Map: Home Range of the Detroit Pheasant”