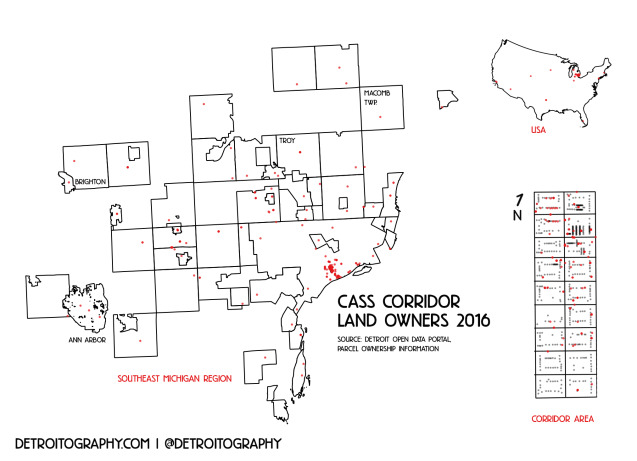 In comparison to the 1971 map based on similar data, this map of the 2016 property information posted on the Detroit Open Data portal shows changes over time and space. The data that was mapped is based on the tax payer address for each property and some properties are held by the same tax payer or “owner.”

Ownership in the Cass Corridor area has remained spotty with no real concentrations, however ownership within the Corridor Area has continued to be most dense for land parcels in the northern half of the area rather than the southern half. Similarly, ownership of Corridor land in the USA has not significantly changed, but there are a handful of additional US States represented.

The biggest change in ownership has been within the City of Detroit and Region. In 1971, there were strong concentrations of land owners in the neighborhoods at the north end of Woodward (Palmer Woods, Green Acres, University District) where more well to do Detroiters lived. However, in 2016 the most dense concentration of land owners is now focused around the Corridor area (Midtown) and Downtown. Additionally, the suburban sprawl process seems to have expanded land ownership to more far flung regional suburbs. For example, Ann Arbor was not represented in 1971, but now has a number of land owners. There have also been suburbs such as the Grosse Pointes that have less ownership in the Corridor area than in 1971.