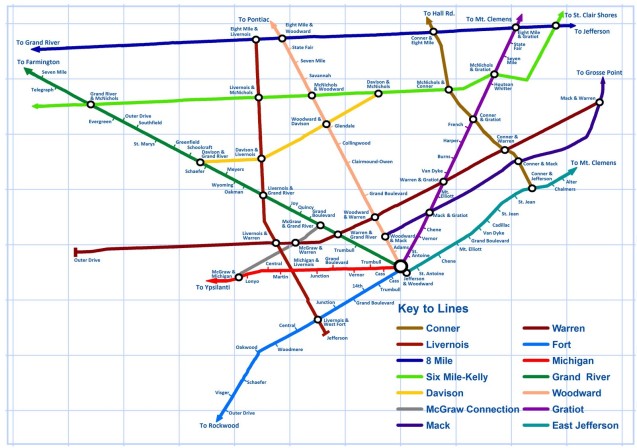 Detroit urban planner, Rob Linn brings us this excellent rail transit map as proposed by the Rapid Transit Commission in 1958.

“The plan identifies seven reasons why Detroit and its suburbs need a unified transit system, including current concerns such as reducing congestion, increasing accessibility, and encouraging compact commercial development. It’s greatest concern, however, was that the CBD was beginning to decline. As the plan notes, “…downtown valuations [assessed value] decreased by 38.5% between 1930 and 1953, and citywide valuations had no change. What is indisputably evident here is the definite and gradual decline of the property valuations not only in the central business district but also along the major commercial thoroughfares in the city.” The commission strongly believed that these space-age trains would draw people to arterial commercial zones and the CBD, and reinvigorate these areas.”