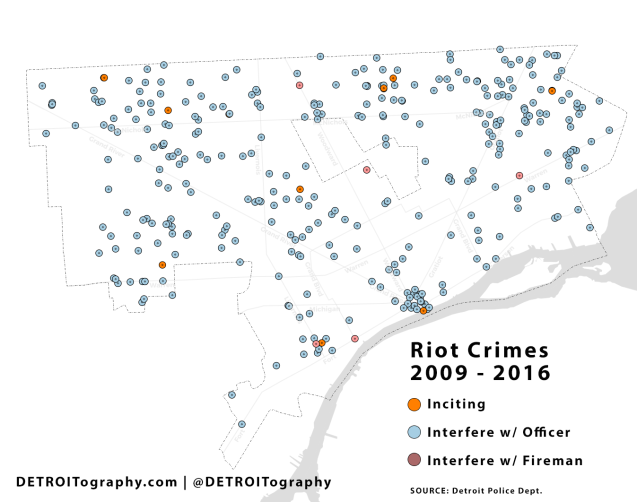 This map includes all criminal incidents that are coded by the police as “riot” which in most cases involve “disorderly conduct” and interfering with a police officer or fire personnel. Since 2009, there have been 323 riot crimes, but only 11 of those were for “inciting a riot.”

“Urging or instigating other persons to riot, but shall not be deemed to mean the mere oral or written (1) advocacy of ideas or (2) expression of belief, not involving advocacy of any act or acts of violence or assertion of the rightness of, or the right to commit, any such act or acts.” 18 USC

Detroit has a long history of civil disturbances with the first such incident recorded in 1783, Chief Pontiac’s Rebellion. Racially charged incidents followed in 1833 with the freeing of the Blackburns who were being held as “fugitive slaves” and in 1850, recorded as the Abolitionist Uprising, which required three militia units to quell. The 1863 Faulkner Riots were the first race riots fueled by misinformation and racial hate. The result of the Faulkner Riots was the creation of Detroit’s first police force. Other well-known “riots” have been instigated by White mobs in 1925 at the home of Ossian Sweet, in 1942 at the Sojourner Truth Housing site, and the 1943 Belle Isle Race Riots.

The 1966 Kercheval Mini-Riot was a precursor to the 5-day 1967 Rebellion. As many have noted, never had Detroit’s civil disturbances required the calling up of federal troops as paratroopers took to the city streets. The end was not 1967, tensions remained high and have continued. In 1975, Mayor Coleman Young attempted to calm crowds after a White bar owner shot an unarmed Black teenager in the Livernois-Fenkell Riots.