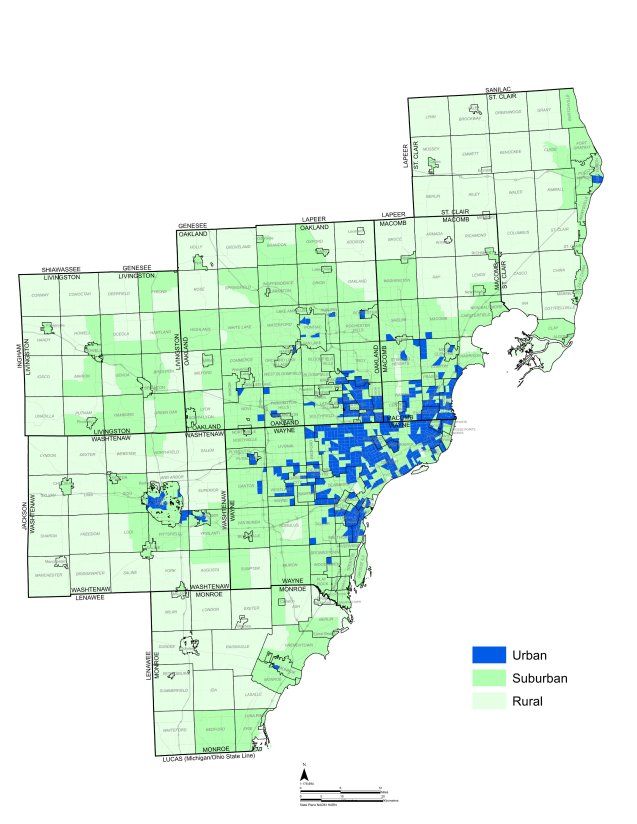 In 2015, FiveThirtyEight (538) and Trulia worked to define “suburban” and “urban.” They surveyed 2,008 adults from across the USA and asked them to describe where they live as either rural, suburban, or urban. They matched those results with the responder’s zip code and created a definition for each geographic term:

Utilizing these definitions, 538 calculated the amount of urban within the top 10 most populated cities in the USA. Some, such as New York and Chicago, were completely urban; others, such as San Diego and Phoenix, were majority suburban. This type of analysis was duplicated for Southeast Michigan. Using 2010 census tracts, households per square mile was calculated. Detroit had 205 urban census tracts, 86 suburban, and 5 rural. By acreage, Detroit is 60% urban, tying Dallas from the 538 study. Clawson, Grosse Pointe, and Hamtramck are 100% urban, in contrast to Utica, Northville, Fraser, Rochester Hills, and Grosse Pointe Farms which are completely suburban.

One thought on “Map: How Suburban is the City of Detroit?”