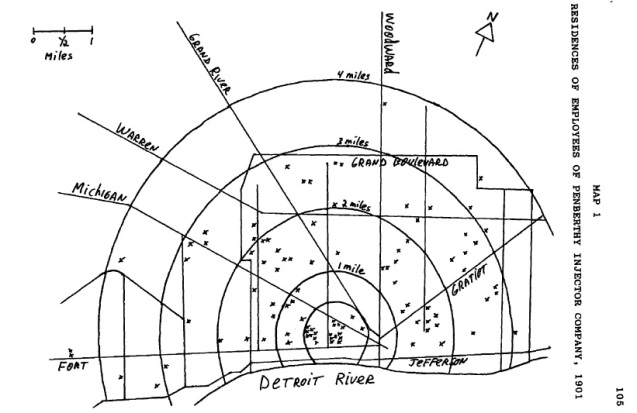 A previous hand drawn map by Dr. Thomas Klug was featured here and he promptly shared another hand drawn map that he published as part of his dissertation “The Roots of Open Shop: Employers, Trade Unions, and Craft Labor Markets in Detroit 1859-1907.”

His map specifically tracks workers at the Penberthy Injector Company where an explosion in 1901 was noted as the second worst industrial accident in Detroit. Klug found that the local newspapers often published the names and addresses of the workers killed or injured in the explosion, which he was able to use to test the degree of integration in Detroit’s labor market by associating workers with factories.

“Map 1 displays this linkage. The names and addresses for 102 employees of Penberthy Injector Company can be confirmed. Each one is shown with an “x” on the map. As indicated, the residences of the company’s employees were scattered throughout Detroit, covering both the west and east sides of the city. One exception is the Woodward Avenue corridor. The area around Woodward, starting from the edge of the downtown business district and continuing past the city limits, was a showcase for elegant mansions and comfortable middle-class homes and apartment buildings. For that reason not many employees of the Penberthy Injector Company lived in the Woodward corridor.”