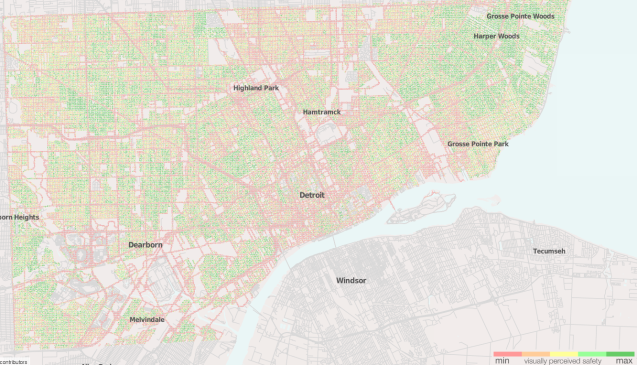 I came across this new exciting tool for perceived safety in cities. Among New York, Boston, and Chicago was also Detroit. I was almost too excited that Detroit was being geographically studied alongside those other cities until I read into the project further.

For curious researchers, the Place Pulse dataset can even be used to study the association between urban perception and other datasets, such as violent crime, creativity or economic growth.”

Place Pulse creates its output via an algorithm called StreetScore that depended on at least 7-10 clicks per city image, of which there are about 100,000 for 54 different cities (not including Detroit). The StreetScore algorithm was then applied to Detroit based on characteristics found in other cities. However, I’m not sure how well it matches with Detroit. 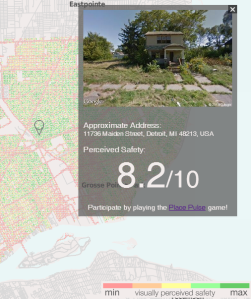 Streetscore assigned this vacant house on the Eastside with a high score although the area is not the most well maintained. I can only assume that the algorithm saw a lot of greenery in the image and thought it was a park or green space. I clicked on a number of highly scored vacant lots and abandoned houses, which I would have given very low scores. 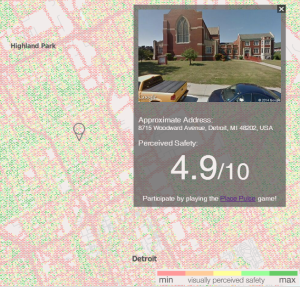 The flip side was also true. Locations where I have driven and walked show up with low scores. This particular example is St. John’s Church with grass mown, cars always out front, and an obviously well cared for building. This church is located in not the best area, but this particular image would make me feel more safe than an abandoned building.

I think the StreetScore is an interesting idea, but it is too difficult to quantify perceptions, which are inherently qualitative and likely vary for people across cities, countries, and continents.

One thought on “Map: StreetScore algorithm of safe streets in Detroit”