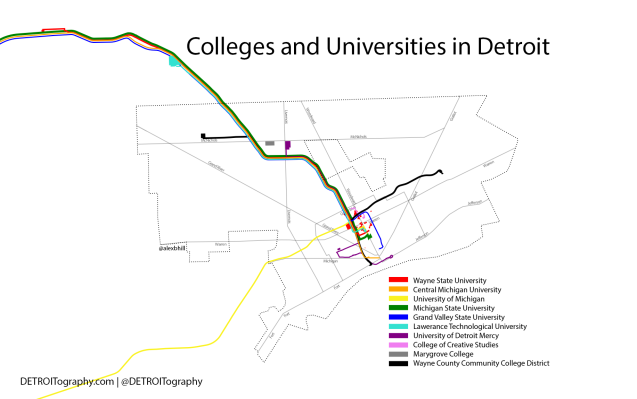 In recent years Detroit has seen an influx of college and university satellite sites. Notably, the University of Michigan (UM) Detroit Center opened in 2005 while the Michigan State University (MSU) Detroit Center opened in 2009. Detroit has been host to a number of colleges and universities from its founding. As Michigan’s largest city and former state capitol, Detroit held the greatest number of highly educated individuals. In 1817, Justice Woodward wrote up plans for the University of Michigania (Catholepistemiad) with 13 departments. The building was constructed at Bates and Congress, but due to disagreements over educational ideas, controversy with the land, and general mismanagement, the university never really took off. Land that had been previously earmarked for a new Michigan state capitol soon became the new University of Michigan in Ann Arbor under the leadership of Henry Tappan in 1837. UM’s proximity to Detroit has afforded many “urban research” opportunities for faculty, staff, and students.

Central Michigan University (CMU) and Grand Valley State University (GVSU) have both set up satellite locations in the last few years. Lawrence Technological University (LTU) is moving its Detroit Studio from New Center to a new building under-construction at Woodward and Willis.

Wayne State University (WSU) in one form or another has been educating student since 1868. It began as the Detroit Medical College. The iconic “Old Main” building was constructed for Central High School in 1896, but then became the Detroit Junior College and then the College of the City of Detroit. In 1934, a handful of small colleges were combined to create Wayne University. The Law School, School of Social Work, and School of Business were added and in 1956 it was constitutionally established (Michigan) as a public institution by the name Wayne State University. Additionally, WSU has an Oakland satellite campus just northeast of the city limits.

Marygrove College (MG) moved to Detroit in 1927, it had previously been known as St. Mary’s College. The college was a women’s only institution until 1970. The college prides itself on Catholic social teachings and actions. The fenced in campus off of W. McNichols has an Oxford University appearance with its grand buildings and architecture.

Wayne County Community College District (WCCCD) was founded in 1967 downtown Detroit. Currently with six separate campuses across the county (3 within Detroit) with an emphasis on career programs plus traditional college programs, such as Liberal Arts.

Downtown/ Midtown are the obvious focal point for the majority of colleges and universities located within the city. The Lodge Freeway and Woodward Avenue are popular thoroughfares for getting around to educational institutions.

GVSU members have the longest to travel at 169 miles to get to their Detroit location. My theory is the GVSU building is mainly a marketing piece with its prime name display location behind Comerica Park. CMU comes in second at 154 miles while MSU is 81.2 miles. UM members travel half that distance at 42.3 miles. This all just goes to show the influence of Detroit as both a regional and statewide center for knowledge.

4 thoughts on “Map: Colleges and Universities in Detroit”

Leave a Reply to Alex B. Hill Cancel reply