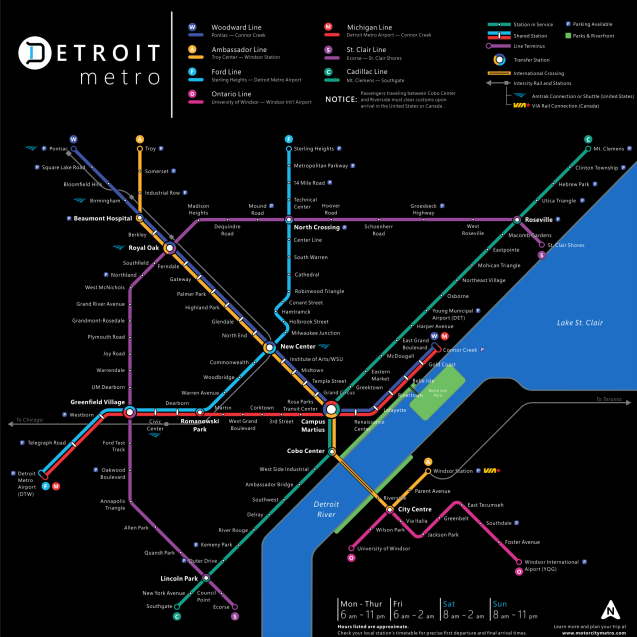 We originally shared a post from Jackson Woods (jwcons) and his proposal for Detroit Area Rapid Transit (DART) fantasy transit map, which received over 12,000 views and 3,000+ shares on Facebook. I was finally able to track him down and found out that he has some great route and design updates to the map, which was recently featured in a Wired Magazine piece on fantasy maps. He has shared the absolutely most up to date version with us. Here is a snippet about the map from Jackson’s new website:

“My first attempt at a Detroit rapid transit map was based on a specific historical what-if: what if Detroit had built a metro system during the late 1960s and early 1970s, when Atlanta, Washington, DC, and the Bay Area were building MARTA, Metro, and BART respectively? The new map is more expansive, and it’s more of a best case or dream scenario. Since the 1980s, Los Angeles has made a major effort to build a modern rapid transit system, going from nothing to about 90 miles of track in less than 25 years with much more still to come thanks to Measure R. What if the Detroit region were able to take a similar course?

What I ended up with is surely deserving of the title “fantasy map.” The Detroit Metro is a system comprised of 155 miles of track and 119 stations. This compares to the 90 miles of track and counting in LA, 129 miles with 97 stations in Washington once the new Silver Line is completed in 2018, and about 220 miles of track with 145 stations in Chicago. The circumferential St. Clair line is a big contributor and the main layout difference from my earlier map, adding nearly 40 miles of track on its own. If your fantasy maps need to have stricter limits to be enjoyable for their plausibility, just imagine the map without it.”