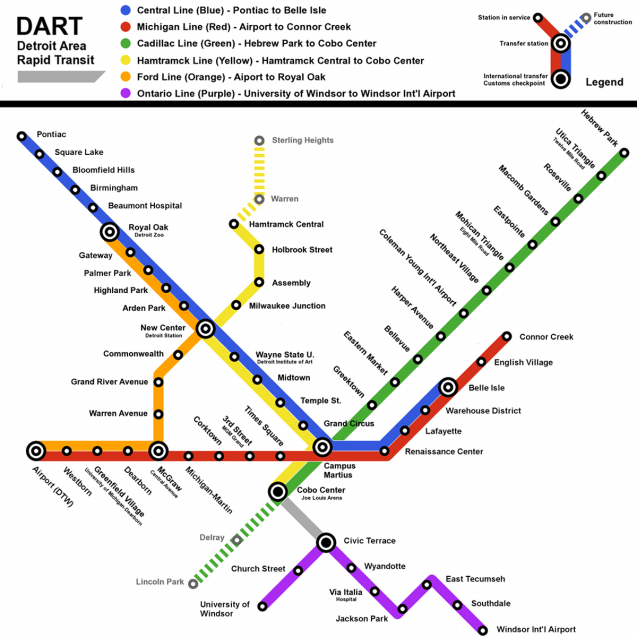 Modeled after the Washington D.C. style metro transit map, jwcons (Jackson) has created this “fantasy” transit map of the Detroit area with an estimated 99 miles of rail and 62 stations.

“Obviously this is pure fantasy in the strongest sense, but I thought it would be fun to think of it as a specific what-if. The closest Detroit ever came to building a subway was during its initial boom in the 1910s and 1920s, which would have given it a roughly Boston or New York-era subway system. (There’s a nice history here if you have JSTOR access.) In this case, though, I decided to imagine a system built at about the same time as cities like Washington, San Francisco and Atlanta in the 1960s and 1970s, perhaps in some alternate universe where one of Detroit’s seven Olympic bids came through and the city built the core lines in preparation. This lets me ignore pre-freeway Detroit and keep more of the Washington Metro style that I’m familiar with. At the same time, it’s a bit of a compromise since I don’t have any 1960s maps of Detroit and I’m not intimately familiar with the city, so the station locations and names reflect the best I had to go on from Google Maps in 2012. Places where there are no houses or businesses often got skipped, even though they may have been thriving in the 1960s and would have warranted a station at that time.”

Read more about this fantasy map from the author HERE