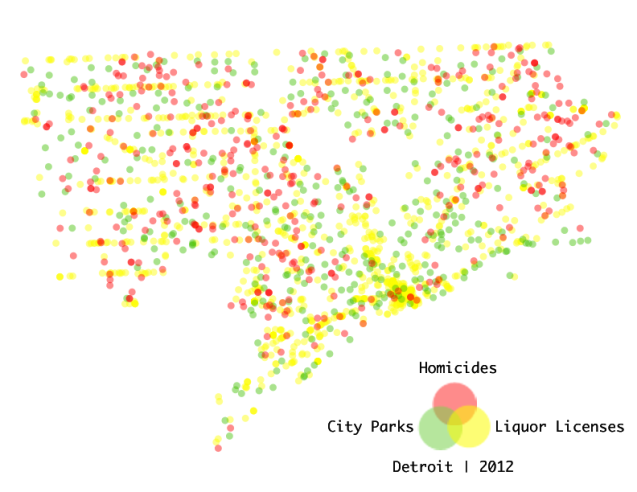 The goal of this map is to demonstrate the relationship between homicide, locations where alcohol is sold/ consumed, and community green spaces.

A great deal of research has also been conducted on the benefit of turning vacant lots into parks or green spaces in order to reduce violent crime. The most important aspect of this, however, is that community parks are beneficial in reducing violent crime when they are maintained. Many city parks in Detroit are not able to be maintained.

I wonder if Greening of Detroit has any data on areas that they have “greened” and if there is any association with reduced violent crime?

Note: This map was made before the city announced closing down parks and limiting maintenance. Additionally, there will be a regression analysis of homicides to liquor stores (excluding bars and restaurants) soon.

East Canfield Village. In front of the new FCA/Stellantis pollution wall, this new sign emerged #eastcanfieldvillage #detroitneighborhoods #detroit #neighborhood #detroitneighborhood #signsofdetroit
Oh City of Hamtramck - most honorary “neighborhood” of Detroit, we love thee #hamtown #hamtramck #detroit #neighborhood
Thanks for the feature @waynestatealum - “Mapping the Motor City” #mappingdetroit #mapdetroit #detroitmap #detroitography
Someone must have done their Detroit research when making this “Map of Mythical Beasts of the United States of America” #mapmonstermonday
First time I’ve ever seen Detroit literally labeled as “The Strait” on any map. This is a 1776 map in Univers Mag #detroitmap #thestrait #detroit
Maps in books and books of maps - there’s nothing better! #detroitmap #mapdetroit