In 1937, Victor H. Green published “The Negro Motorist Green Book” in order to:

“compile facts and information connected with motoring, which the Negro Motorist can use and depend upon.”

The 1937 edition was limited to New York City, but by 1938 it was “listing all of the States east of the Mississippi River.” The Green Book became a directory of an different kind of “underground railroad” for the Jim Crow era allowing African Americans to map the most welcoming routes to reach vacation spots, hotels, beauty parlors, service stations, mechanic shops, and more. The Green Book regularly included State specific traffic laws and issues for African American motorists to watch out for.

Detroit first appeared in the 1938 edition of the Green Book with listings for 9 hotels, 2 night clubs, and 1 service station. They are located in a very small area where there was a high density of non-White residents. 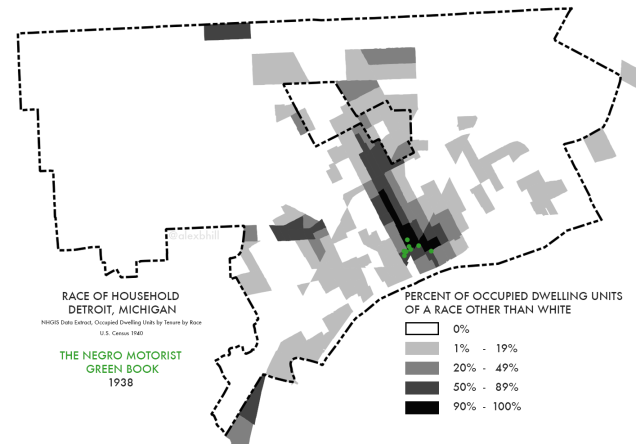 By 1949, Detroit’s extensive listings demonstrate how it became a mecca for Black tourism and entertainment at the height of Paradise Valley. Not surprisingly, the Green Book locations match exactly with areas of Detroit with more Black residents (due to restrictive and discriminatory housing policies). The 1949 edition also included listings for Canada and Mexico.

By later editions, in 1963, a defining year for the Civil Rights Movement, the Green Book lacks welcoming amenity listings and instead includes pages on national and local laws so that African American motorists can know their rights while traveling.

The Green Book in some ways reflected the state of the nation in a given year with respect to discrimination, racism, and the rights of African Americans. Today we’ve seen more visible displays of racism. Through my research on food access people often tell me about using word of mouth to avoid discriminatory grocery stores. I can only imagine the extent to which this type of directory is being maintained by word of mouth still today. We have a much work to do so that all may travel with dignity and without fear in their own cities and those they hope to visit.

Thanks to the Green Books collection at NYPL’s Schomburg Center for Research in Black Culture for making these texts available.

Uhhh what in the what is this city boundary? #detroitish #detroitmap #mapfail
Come out to GPPL for #Detroitin50Maps on November 1st! #mappingdetroit #mapdetroit
Schaefer 7/8 Lodge Association circa 1974 - many Detroit community areas are known for their road intersections rather than a single name #detroit #detroitneighborhoods #neighborhood #burtonhistoricalcollection #colemanyoung
Some areas of Detroit are significant enough to get their own official expressway signage. Mexican immigrants have been coming to the city since the 1920s #mexicantown #mexicantowndetroit #detroitneighborhoods #detroit #neighborhood
Mystery giant framed city wall map in the Grandy Building (2017) before it was condemned (2019) along with all the records/archives from the Health Dept. #detroit #mapsmapsmaps #tbt #detroitmap
Come to the @fisherbldgdet for a a solo exhibit of “Detroit in 5 Maps” and then get the book with 50 maps at @puredetroit313 #detroitin50maps #detroitmonthofdesign