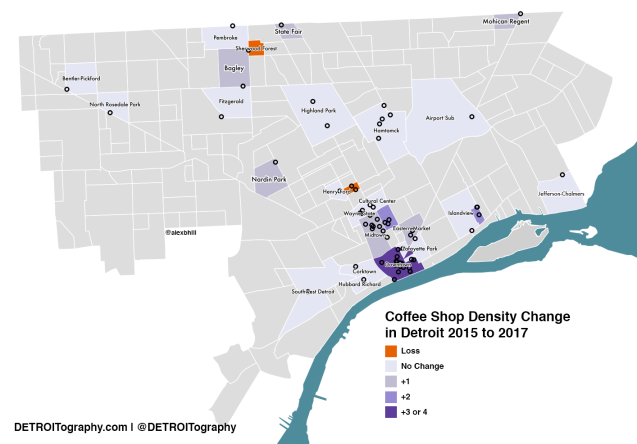 The recent announcement of Cafe con Leche’s second closing is bittersweet for many as new coffee ventures are brewing. El Club is looking to expand with a cafe space, Cake Ambition won Motor City Match funding, MACC is working on a cafe laundromat space, and Stef-N-Ty plan to add a coffee shop next door to their store in the Northend.

In my 2015 analysis of coffee places in Detroit, Highland Park, and Hamtramck I identified some 54 coffee shops in Detroit. Considerably more than the 21 count that has been floating around. However, due to the nature of Detroit’s economic and retail recovery, many national chains chose to locate inside the safe walls of existing venues. Out of 9 Starbucks locations in Detroit only 2 are stand-alone shops. Biggby and Tim Hortons are often located inside other buildings as well although there are many more stand-alone Tim Hortons and Dunkin Donuts locations.

Since 2015, I’ve seen 6 coffee shops close, 2 or 3 changed ownership but remained in operation, and 20 new coffee spots open. The new grand total comes to 67 coffee shops within Detroit’s outer border. Only New Center and “Sherwood Forest” saw losses of coffee shops that were not filled by new ones. Interestingly, Midtown only gained one coffee shop while Downtown added 4 new coffee shops.