Detroit’s place in American music has long been cemented. From jazz to techno, soul to punk, and many points in between, Detroit was the home of so much musical invention. It was also home to many independent record stores, as well as regional and national chains. How the location of these stores has shifted over time is one part of my dissertation on record stores and urban change (which also includes Chicago and Milwaukee). The record store is still an important place of musical discussion, discovery, and debate in Detroit, as it was decades ago. But where record stores are located in the segregated landscape of Detroit has changed, based on the following maps.

Tracts from Wayne, Oakland, and Macomb county are included in these maps, and the thin blue line represents the Detroit city boundary. The green areas are majority white tracts (meaning that 70% or more of that census tract is white), while yellow ones are majority black (meaning that 70% or more of that tract is black). When looking at the maps, two major patterns emerge. First, record stores seem to move away from the central business district in a radiating fashion over time. Second, Detroit’s record stores were once more highly clustered within black majority areas. In some instances, it appears that as the black population moved, so did record stores.

This becomes even more apparent when looking at the percentage of record stores in majority black census tracts in Detroit from 1970 to 2010. In 1970, 6 out of 10 independent record stores were in majority black areas. By 2010, that figure fell to 4 out of 10. Stories of vinyl’s revival, brick and mortar music retailer survival, and the continued success of Record Store Day are encouraging. These stories signal that even though music has become “devalued” in a highly digitized world, that physical formats retain special meaning for consumers today. But looking at record store loss with a much longer historical lens suggests that a part of the story is missing: the record store’s connection to black America. Detroit provides a good example of just that. 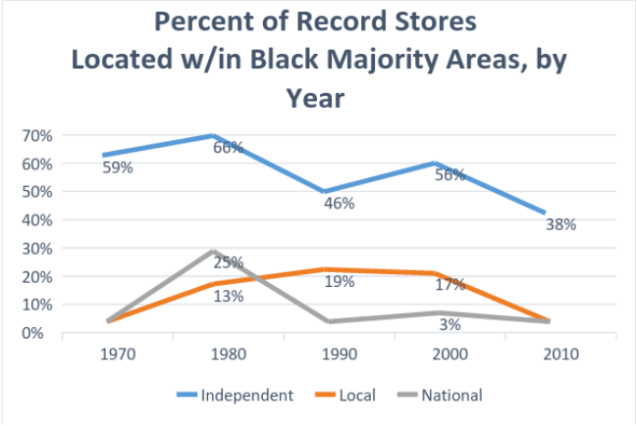