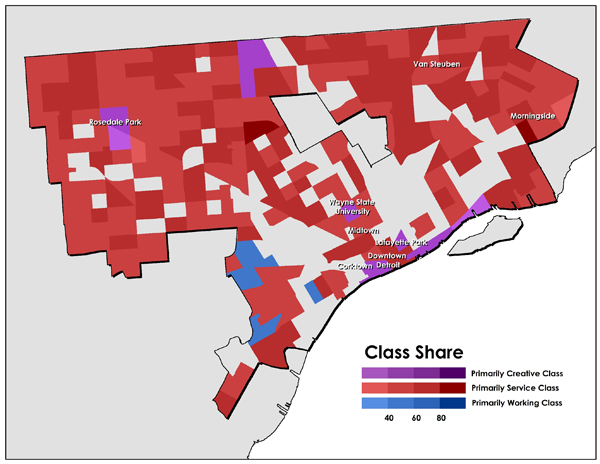 This map comes from a series by Richard Florida of The Atlantic’s City Lab looking at class in the USA through the lens of the Census Bureau’s American Community Survey (ACS).

“[…] today’s three major classes: the shrinking middle of blue-collar workers in manufacturing, transportation, and maintenance; the rising numbers of highly paid knowledge, professional, and creative workers in the creative class; and the even larger and faster-growing ranks of lower-paid, lower-skill service workers.” (Link)

It is not surprising to see the pockets of Detroit’s creative class in the well-known neighborhoods (Lafayette Park, Corktown, East Riverfront, Midtonw Palmer Woods, Grandmont-Rosedale) that get a lot of attention while the rest of Detroiters are primarily in service worker roles. The expansive service class represents the loss of Detroit industry and the loss economic opportunity for Detroit’s residents.

More from the author:

“Much of the city outside of the downtown core has literally been abandoned. More than 25 percent of the city’s residential parcels (more than 90,000) are empty lots, and another 10 percent (33,500 parcels) are vacant homes, according to a comprehensive 2010 survey.

Detroit’s creative class is located along the lakeshore in the city, as the map above indicates, in a narrow strip that runs north along Jefferson Avenue from downtown through historic Indian Village towards Grosse Pointe. Home to Wayne State University and major arts and cultural institutions, rapidly revitalizing Midtown has also drawn a growing creative class population.

The purple blotch in the north is upscale Palmer Woods, noted for its large Tudor homes close to Detroit Golf Club. The neighborhood was founded in the early 20th century as an exclusive enclave for auto industry barons, including the founders of Fisher Body, and is where a number of Motown recording artists live today.”

In 2016, I saved this large Hearne Brothers wall map before the former Detroit Animal Care and Control building on W. Jefferson was demolished. It was well used by staff to locate cross streets. #detroitmap #mapsathome #detroit
East Canfield Village. In front of the new FCA/Stellantis pollution wall, this new sign emerged #eastcanfieldvillage #detroitneighborhoods #detroit #neighborhood #detroitneighborhood #signsofdetroit
Oh City of Hamtramck - most honorary “neighborhood” of Detroit, we love thee #hamtown #hamtramck #detroit #neighborhood
Thanks for the feature @waynestatealum - “Mapping the Motor City” #mappingdetroit #mapdetroit #detroitmap #detroitography
Someone must have done their Detroit research when making this “Map of Mythical Beasts of the United States of America” #mapmonstermonday
First time I’ve ever seen Detroit literally labeled as “The Strait” on any map. This is a 1776 map in Univers Mag #detroitmap #thestrait #detroit