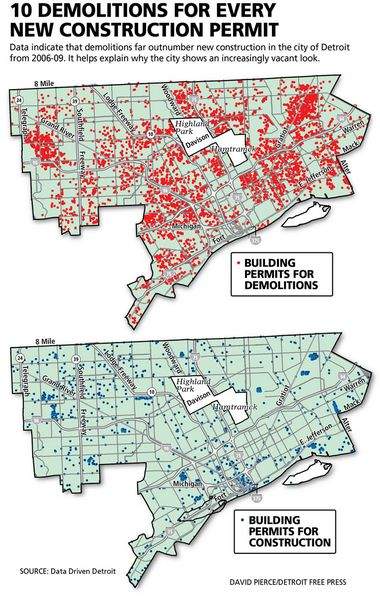 Not much more needs to be explained here. These maps are good representations of Detroit’s future development especially as Dan Gilbert has been appointed by President Obama to lead the Blight Task Force and says he has plans to demolish every blighted property in the city. Even in 2009 these maps showed a number of building permits Downtown. Soon we will see Gilbert and the Cotton family make their mark on Detroit’s skyline with new skyscrapers. There are notable building permit clusters in the neighborhoods and it would be great to know what those represent. Hopefully, they represent building permits to renovate existing structures. There is a great need for many Detroit families to be able to retrofit their homes in order to improve the health and quality of Detroit’s aging housing stock, maybe there will be federal dollars in the future for such a program.