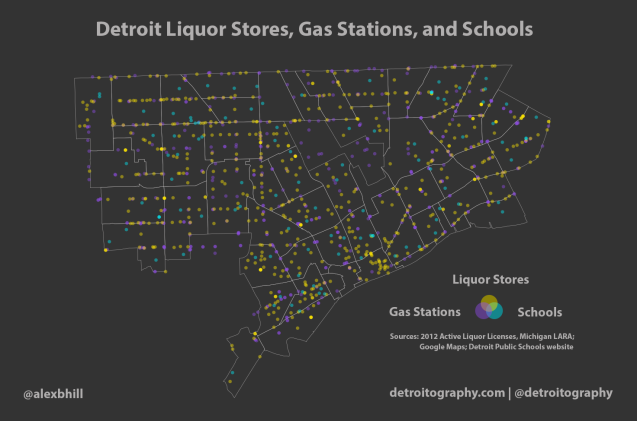 Detroit Police Chief James Craig has made a lot of big changes since taking the position on July 1st. There have been a number of senior staffing shake-ups as well as a shift to getting more patrol officers on the street.

Earlier in the week on Wednesday, October 2nd , Craig asked gas station and party store owners to clean up their properties to deter crime.

At first blush it would appear that Chief Craig plans to just focus on the entire city (see first map). There are 582 liquor stores, 449 gas stations, and 105 schools. That makes 1,136 key locations that Craig wants neighborhood officers to focus on, but how does that break down by neighborhood? Which neighborhood might see an increased presence of neighborhood police?

(Note: neighborhood is a very fluid term in Detroit, so we relied on the City of Detroit Master Plan neighborhoods GIS shapefile)

By aggregating these 1,136 locations by neighborhood, we can see where police might increase presence or at least be more noticeable. Connor just below the Osborn (Mt. Olivet) area, Finney on the far East side, and Cerveny/ Grandmont (Grandmont-Rosedale) to the West have the highest numbers of these locations. This is not surprising based on the fact that the city’s population is more dense to the far East and West. This map also helps to show greater prevalence of locations on the greater West side than the East side. Ok, great so now we know in general which neighborhoods have a greater number of locations that the new NPO program wants to focus on, but how does that map with crime trends in Detroit?

In general, homicide rates follow the same trend as property crimes (burglary, larceny, car theft). The best available data is on homicides, so that was used a general crime marker. In comparing the two maps it would appear that neighborhoods that have higher density of liquor stores, gas stations, and schools also tend to have higher prevalence of homicide. It appears that the Detroit Police Department and Chief Craig have made good on their promise to utilize more data driven approaches to crime prevention. Hopefully the NPO program is able to improve safety in these neighborhoods. What remains to be seen is the implementation of Stop-and-Frisk in these neighborhoods and if these neighborhoods also become hotspots of unjustified frisks.

One thought on “Map: Where will the new Neighborhood Police Officers program focus?”