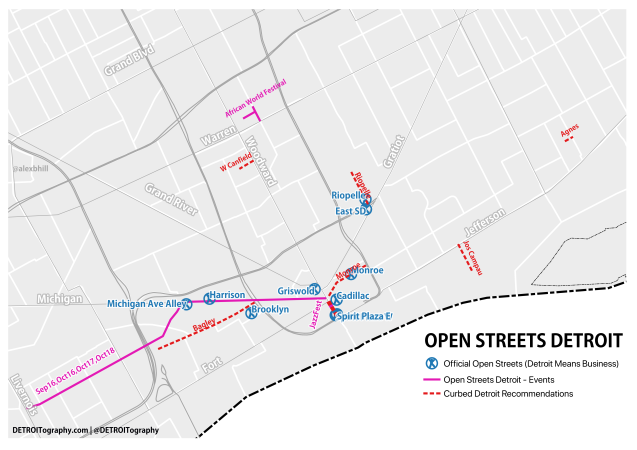 In 2017, the City of Detroit and partners were funded by the Knight Foundation to test out the “Open Streets” campaign in Detroit. The effort resulted in a well-branded annual event that took over a 4 mile stretch along Michigan Avenue from Campus Martius and taking Vernor Hwy to Livernois on Saturday mornings (I don’t count the event in Rouge Park).

Cities across the world are now rethinking roadways, how to manage increased bicycle traffic, and ways to making walking and dining safer by permitting more space for those activities than for cars. Great ideas! However, Detroit is still a bit slow on the adoption of more people-centered street configurations. Sure most of the city could be argued as “open streets” due to low population densities and minimal car traffic, but that doesn’t show any commitment by local government to serve the needs of people.

Through its “Detroit Means Business” COVID-19 strategy the City solicited application for expanded dining patios and potential areas for “open streets” (in some cases alleys). They should have just used Aaron Mondry’s crowd-sourced list from Curbed Detroit – some match perfectly. Various festivals in Detroit regularly close certain streets as well that could exist as continuous pedestrian routes as well, somewhat like Pallister Street in New Center. My two pitches are for Cass Avenue to be bus and bike only and for Second Avenue to exist as a car-free greenway from Downtown to New Center.

“Open Streets” to date have been strategically timed and contained. The map shows that these tend to be in a very small area of the city associated with the 7.2 square mile “Greater Downtown,” but there are numerous examples where this kind of planning could benefit neighborhoods outside of Downtown. An “open street” for every neighborhood!

Shout out to Transit Guide: Detroit (Dave Gifford), Detroit Traffic Management and Control, and Erika Linenfelser for sharing information not found on any city website.