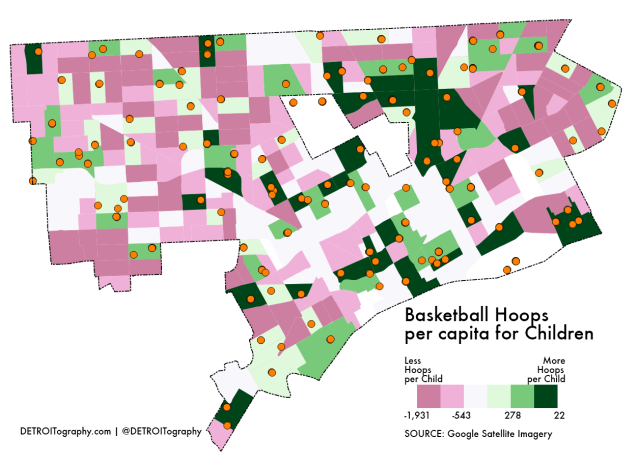 Basketball is the most popular sport by far in Southeast Michigan according to the “State of Play” report by the Ralph C. Wilson Jr. Foundation. A friend asked me last month if there was any data on all the basketball courts in the city. I knew that the parks kept track of amenities, but that wouldn’t capture all the available courts and hoops in the city that might be located at schools, churches, etc.

I embarked on the joyous adventure of combing Detroit from the skies via Google’s Satellite Imagery and a grid of the city. Basketball courts, it turns out, are fairly easy to spot because of the size of paved space needed, the signature painted lines, and the shadow of basketball poles. Surprisingly, many schools do not have outdoor basketball amenities and many churches have partial courts in their parking lots.

This was in no way a vetted and comprehensive analysis because likely I missed numerous courts and hoops. I specifically didn’t count hoops that were set up on residential streets and indoor courts were also not assessed. Similar to the access to park acres, there are many areas of the city with a high number of children and a lack of basketball hoops. Indoor hoops may make up the difference, but those may take longer to identify and assess.

2 thoughts on “Map: Basketball Hoops per capita for Children in Detroit 2017”

East Canfield Village. In front of the new FCA/Stellantis pollution wall, this new sign emerged #eastcanfieldvillage #detroitneighborhoods #detroit #neighborhood #detroitneighborhood #signsofdetroit
Oh City of Hamtramck - most honorary “neighborhood” of Detroit, we love thee #hamtown #hamtramck #detroit #neighborhood
Thanks for the feature @waynestatealum - “Mapping the Motor City” #mappingdetroit #mapdetroit #detroitmap #detroitography
Someone must have done their Detroit research when making this “Map of Mythical Beasts of the United States of America” #mapmonstermonday
First time I’ve ever seen Detroit literally labeled as “The Strait” on any map. This is a 1776 map in Univers Mag #detroitmap #thestrait #detroit
Maps in books and books of maps - there’s nothing better! #detroitmap #mapdetroit