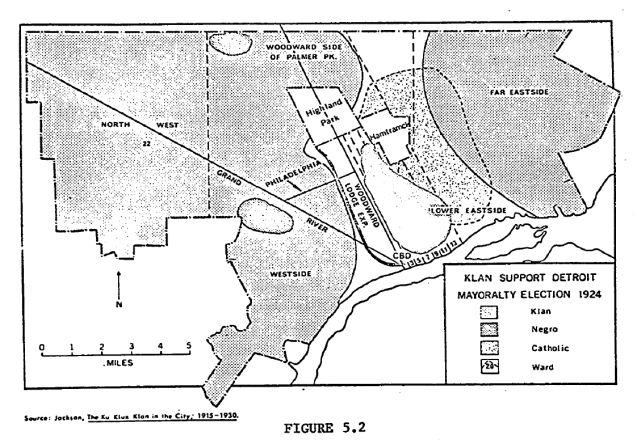 This map was created by Donald Deskins Jr. as part of his PhD dissertation on “Residential Mobility of Negro Occupational Groups in Detroit 1837-1965” at the University of Michigan in 1971.

“Immediately following World War I, Klan membership in Detroit numbered in the thousands. […] Claiming a 200,000 local membership, this group was very active during this period. So active in fact that the Klan-supported write-in candidate would have become mayor of Detroit in 1924, had it not been for 17,263 ballots which were declared invalid due to misspelling, etc.

Figure 5.2 portraying the areas in Detroit where Klan support was strong, makes it apparent that the Klan support was almost ubiquitous except in ethnic areas on the east side and in the Negro community. Strongest Klan support was located between the city’s two major Negro enclaves in the triangular area defined by Grand River, Philadelphia and the John C. Lodge Expressway.

One thought on “Map: Klan Support in Detroit Mayoral Election 1924”