The evolution of TechTown has been slow, but steady. The goal has been to create an entire district of placemaking, creative endeavors, and exciting new research. Sasaki Associates, along with Midtown Detroit Inc. and U3 Ventures want to create 2 public plazas along 2nd Avenue and reduce surface parking lots from 27% to 6% within the TechTown District.

There is a wealth of people and ideas in the area already with Henry Ford HQ, Wayne State’s new iBio medical research building completing construction, and the College for Creative Studies (CCS) existing work in the Argonaut Building. Wayne State has a 2020 vision to strengthen the campus along the Woodward Corridor, Henry Ford is investing in the area adjacent to TechTown, and Midtown Detroit Inc. recently finished a competition to improve the bridge underpasses (viaducts) in the area. The TechTown District would be a major connector between Midtown and New Center and would solidify connections between some of Detroit’s core institutions. 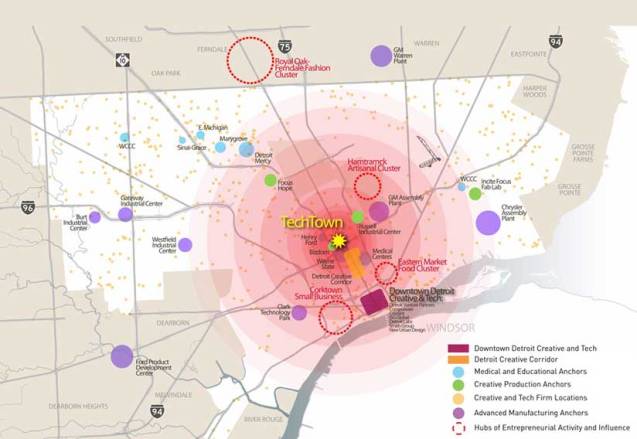 In 2016, I saved this large Hearne Brothers wall map before the former Detroit Animal Care and Control building on W. Jefferson was demolished. It was well used by staff to locate cross streets. #detroitmap #mapsathome #detroit
East Canfield Village. In front of the new FCA/Stellantis pollution wall, this new sign emerged #eastcanfieldvillage #detroitneighborhoods #detroit #neighborhood #detroitneighborhood #signsofdetroit
Oh City of Hamtramck - most honorary “neighborhood” of Detroit, we love thee #hamtown #hamtramck #detroit #neighborhood
Thanks for the feature @waynestatealum - “Mapping the Motor City” #mappingdetroit #mapdetroit #detroitmap #detroitography
Someone must have done their Detroit research when making this “Map of Mythical Beasts of the United States of America” #mapmonstermonday
First time I’ve ever seen Detroit literally labeled as “The Strait” on any map. This is a 1776 map in Univers Mag #detroitmap #thestrait #detroit