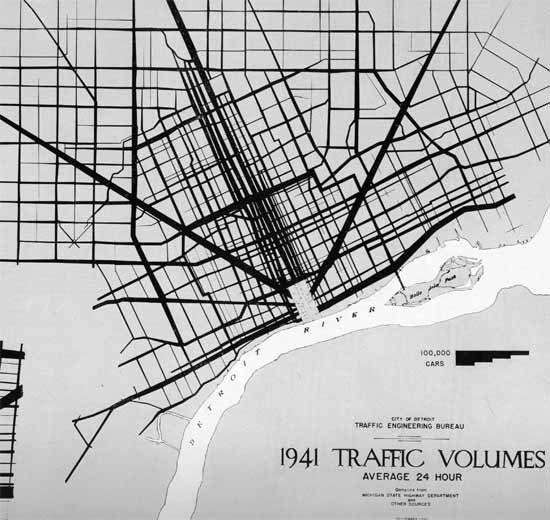 The arterial vehicular traffic jams in Detroit can be cleared only by breaking the bottlenecks in the heart of the city where the greatest volume occurs. Traffic studies clearly show that a large percentage of traffic proceeds between its origin and destination on illogical routes. The crow-foot avenues, the confused tangle of the old city, the rectangular pattern of the newer developments, the network of railroads, the absence of breaks in topography through which arteries might have been built behind the growth of the city, the monotonous flatness downtown which prompted the solid building with no open spaces between developments, the relation of business and industry to the waterfront; all these contribute to the circuitous travel necessary to reach most points by automobile. The streets of Detroit are wider than those in most cities hut they arc not wide enough in the right places and cannot he stretched enough at most throats of congestion to meet the increasing traffic loads. The greatest barriers to convenient and safe automobile travel are the automobiles themselves which were built faster than the streets were modernized to accommodate them. 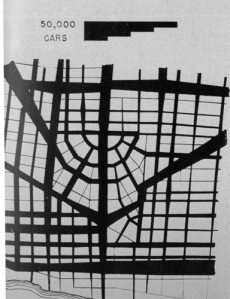 These maps and the traffic analyses led to the emphasis on expressway development as opposed to regional and rapid transit. The unfortunate conclusion from these analyses were:

With no natural open spaces to follow, the new expressways must be located largely through solid development. It is fortunate that the general pattern of traffic flow coincides with belts of depressed property cheap enough to acquire for wide traffic arteries.

The areas of “depressed property” being referenced were the majority Black areas of Detroit, most notably Hastings Street, Paradise Valley.