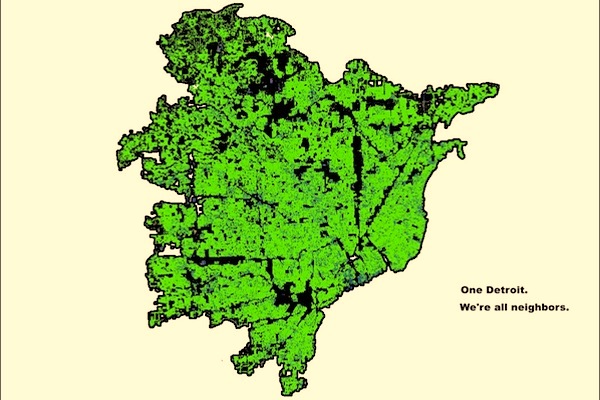 Francis Grunow ponders on Model D about regional cooperation and efficiency. Important identity questions that match up with the definition of Detroit through our “100 Maps of Detroit” piece. There is a larger question here, but one that is critical to the future of Detroit and Michigan as a whole: “can we recognize and move past our troubled history to make Detroit better for everyone?”

“Of all the things I might change about Detroit, if I could choose just one, I would settle the question of what it means to be “from Detroit.” Of course this question is a powder keg. Identity, class, race and politics all get tied up in a pretty sticky wicket. On the one hand, it’s easy. Historically, Detroit is a pretty well defined place, growing in stages since its founding in 1701, and today, “Belle Isle to 8 Mile,” as a recent guidebook so simply suggests, is straightforward enough. You’re either from here, or not.

But, by turns, Detroit is also, equally, a state of mind, a badge of honor, and a curse for some — far too many, unfortunately. The thing is, Detroit could have had a wholly different history. It may have grown and expanded in much the same way it did, but in another version, the city would have also annexed the communities around it as it grew, and as it had done for most of its history.

[…] To see what One Detroit might look like, I did a little experiment of my own. Using the household size map as a base, and the free (but frustrating) open source GNU Image Manipulation Program, or GIMP, for short, I was able to create a new map of One Detroit, in a few easy steps.”