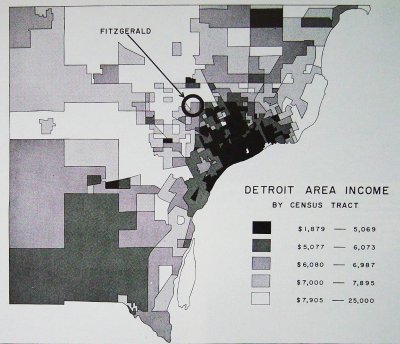 This map comes from William Bunge in what I assume is around 1970 since he highlights the Fitzgerald community where he had been doing participatory mapping in the 1960s and 1970s (his book was published in 1971 on the Fitzgerald community). Oddly, this map doesn’t look much different than the Urban Institute’s maps of poverty between 1980 and 2010. Income disparity and poverty has been an issue that Detroit has long struggled with. Strong industry in Detroit had only a brief impact in sustaining widespread income benefits for residents of Detroit.